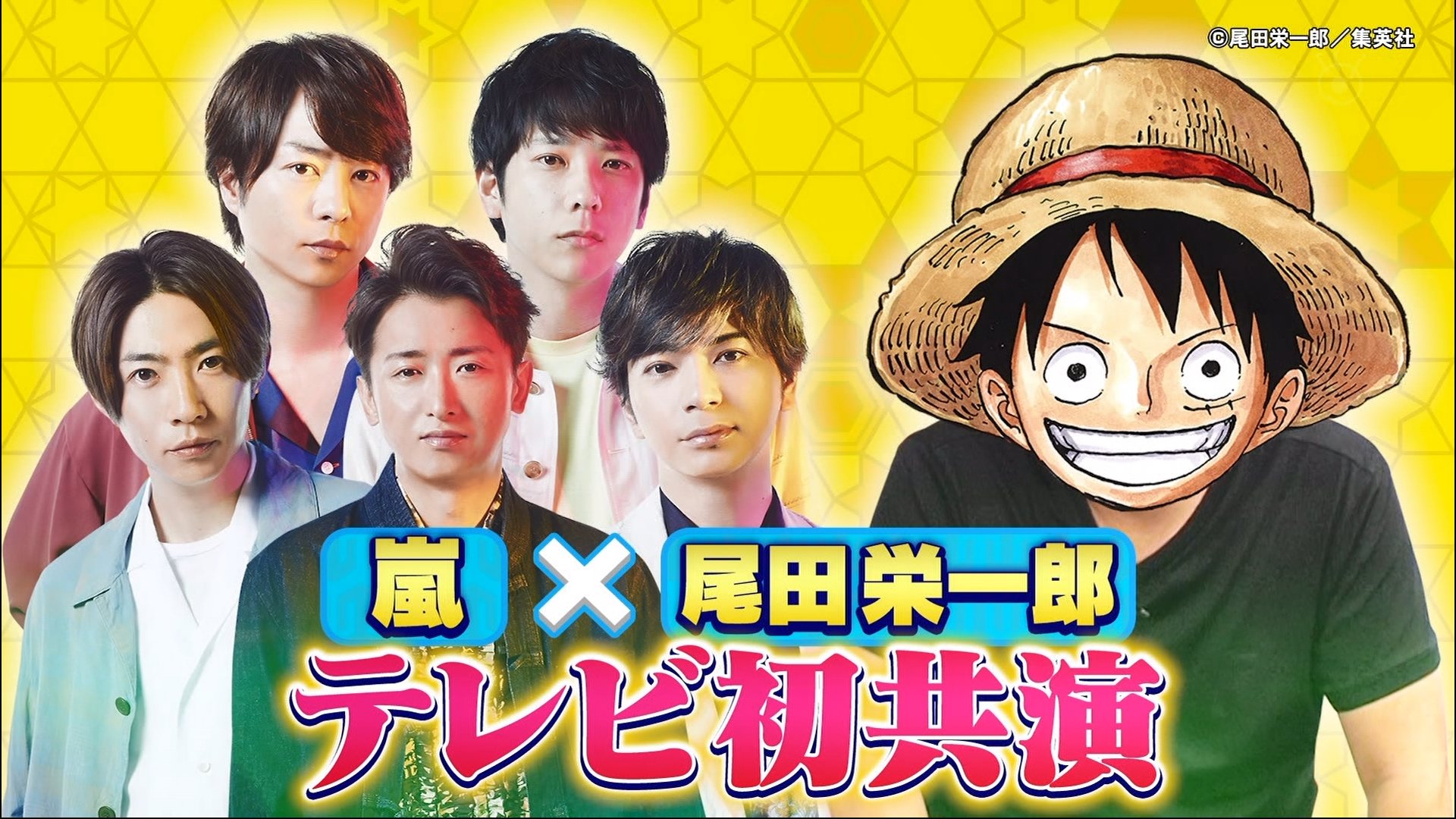 In the program, the Japanese megaband ARASHI interacts with EIICHIRO ODA, the mangaka of the popular manga ONE PIECE and discuss the manga’s past and future.

Oda said he would like to finish ONE PIECE in 4-5 years (again). He rarely goes to Jump office where today he witnessed his raw manuscript of chapter 1 for the first time in 23 years.

Oda says end is decided and all the editors know it. Editor Naito says the end is awesome.

ONE PIECE was rejected 3 times before serialization in editors’ meeting. Editor Asada told Oda sensei that he was surprised to this news. Oda sensei replied he was more surprised than anyone else because he was very confident with ONE PIECE.
However, Oda sensei didn’t plan to bring his ONE PIECE manuscript to Shonen Magazine or Shonen Sunday because he wanted to work on the same magazine as Toriyama Akira (Dragon Ball creator) whom Oda respects a lot. He says he is a one-hit-wonder…just a veeeeery long hit.

Oda googles words such as “interesting manga” to find manga to read.

Oda doesn’t have an idea to draw another manga after ONE PIECE.

Oda’s meeting with editor via phone usually lasts at least 3-4 hours but on one certain ocassion the conversation lasted 12 hours with former editor Hattori. The meeting was so long that editor Hattori fell asleep at some point…

When editor Sugita was first introduced to Oda as a new editor, Oda jokingly told him “Editor Change  Please!”.

Once editor Sugita was very frustrated due to a delay of the weekly manuscript, but when he read it, he couldn’t help crying. It was the chapter where Rebecca met Kyros. Oda said he also cried when drawing the chapter. He says his audience would not be moved to tears unless mangaka himself cries.

There remain a lot of super-entertaining stuffs he wants to draw.

Oda wanted to draw ninjas earlier but didnt because of Naruto.
Oda loves to watch Japanese comedians on TV then research them on YouTube
He loves to go with his family. Has food and video games so he’s set.

Oda revealed his favorite scene in the series.
1. Opening scene of Wano
2. Robin puts Mangrove’s tree sap to Usopp. Oda says it helps audience to feel as if ONE PIECE world is real.
3. Campfire scene in Skypiea arc. It was the scene which Oda wanted to draw most in that arc, infact that scene was the whole reason the Skypiea arc came to be.

1. He goes to health spa. Oda believes anyone who lives near health spa would be happy
2. He can successfully cook rare meat.
3. Anime staffs have good relationships as if they are family members.

Here is my summary of Oda’s TV interview today. Summary is divided to multiple tweets.👍
Oda said he would like to finish OP in 4-5 years (again). He rarely goes to Jump office where today he witnessed his manuscript of chapter 1 for the first time in 23 years.😆

Oda revealed his favorite scene in the show.
1 Opening scene of Wano
2 Robin puts Mangrove’s tree sap to Usopp. Oda says it helps audience to feel as if OP world is real.
3 Campfire scene in Skypiea arc. It was the scene where Oda wanted to draw most in that arc (end of summary😊 pic.twitter.com/CQDaF5Efj8

Fri Aug 28 , 2020
On Thursday, Aug 27 the October issue of Kadokawa‘s Monthly Comic Alive magazine revealed that Mahōka Kōkō no Rettōsei: Raihōsha-hen (The irregular at magic high school: Visitor Arc), the second season of The irregular at magic high school television anime, will premiere in Japan on October 3. The series was delayed from July to October due to the effects of […]