The Bureau International des Expositions (BIE) announced that it has named anime creator and director Kawamori Shoji as one of 10 co-producers of Osaka’s Expo 2025.

Eight of the producers will each develop a focus area that follows the World Expo’s theme: “Design Future Society for Our Lives.”
Kawamori is working on a focus area that revolves around “making the connections of all ‘life’ living in our universe, ocean, and earth to protect and nurture one another.”

This will be the second time Osaka has hosted a World Expo after Expo ’70, 55 years earlier. Kawamori visited Osaka’s first World Expo when he was still in elementary school, and he credited the event with inspiring his lifelong exploration of world culture, science, and science fiction. 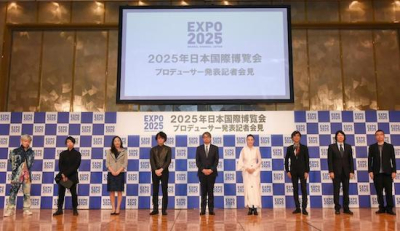 The Expo’s other nine producers are:

Kawamori is perhaps most famous for being a key creative planner in The Super Dimension Fortress Macross anime series. He designed most of the franchise’s iconic transforming “variable fighter” mecha, and oversaw most of the main installments in the franchise, including the latest, Macross Delta.

Kawamori has also created the Aquarion, AKB0048, and Arjuna series, and most recently was a chief director on Jūshinki Pandora at Satelight, the anime studio for which he serves as a board director. He has contributed mechanical design work to Patlabor: The Movie, Patlabor 2: The Movie, Eureka Seven, Outlaw Star, Ghost in the Shell, and more. He is credited as the original creator of The Vision of Escaflowne, Basquash!, and Nobunaga The Fool. He has worked in anime production as a director, screenwriter, mechanical designer, and storyboarder.

Outside anime, he designed one of Sony’s Aibo robot dog variants and contributed to the designs of Takara’s Diaclone Car Robot toys, which eventually became Optimus Prime, Prowl, Ironhide, and other toys in Hasbro’s Transformers line. His game contributions include the original mechanical designs for the Armored Core franchise and the Devil Breaker weapons in Devil May Cry 5. Small Worlds, the company behind the world’s largest indoor theme park of scale miniatures, appointed Kawamori as its chief creative officer.

The World Expo is held every five years and can last in for up to six months in their host city. The themes of World Expos are designed to raise awareness of and find responses to universal challenges of our time. Milan, Italy held the most recent Expo in 2015 with the theme “Feeding the Planet, Energy for Life.” Dubai, UAE is hosting the 2020 World Expo, which the BIE General Assembly postponed to 2021 due to the new coronavirus disease (COVID-19).

Sat Jul 18 , 2020
The television ratings below are an estimate of the percentage of the population that watches a given program, based on data from a survey of households in Japan’s Kanto region. The ratings do not count recordings that viewers watch later. Program name Broadcaster On-air date Broadcast start-minutes Program average household […]