LiSA‘s new single “Homura” (the theme song for the Kimetsu no Yaiba: Mugen Ressha-hen film) sold about 32,000 more copies to rank #1 for the third consecutive week on Oricon’s singles chart for the October 26-November 1 week. This makes her the first artist to top the ranking for three consecutive weeks in 12 years and 10 months, since the band SMAP achieved the feat with their “Dangan Fighter” single in January 2008. The single has sold a total of around 141,000 copies since it shipped in October 14.

LiSA‘s “Homura” single sold 68,000 copies in its first week, while the LEO-NiNE album sold 66,000 copies first week. Both shipped on Wednesday, October 14. The single is LiSA‘s first chart topper, while the album is her second. She is the first solo female artist to rank #1 for two straight weeks since Kana Uemura accomplished this feat with “Toilet no Kami-sama” in January 2011.

Wed Nov 4 , 2020
Kodansha is holding a student-only art contest to find the best anime chalk artist. Participants can chose choose from two anime muses: The Quintessential Quintuplets or Shingeki no Kyojin. The contest launched on October 21 and will run until November 11. The contest idea stemmed from a request received by […] 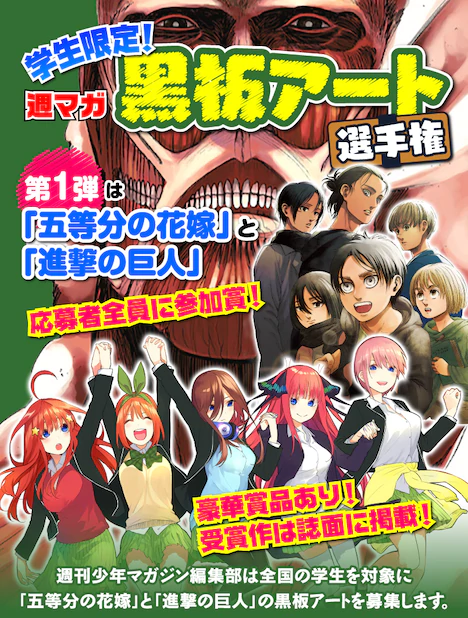