Japanese publishing house Shueisha confirmed that when the 22nd compiled book volume of Koyoharu Gotouge‘s Kimetsu no Yaiba manga ships on October 2, the manga will have 100 million copies in circulation (including digital copies).

Ryōji Hirano will launch a short spinoff manga titled Kimetsu no Yaiba: Rengoku Gaiden centering on the Flame Hashira character Kyōjurō Rengoku. Theatergoers in Japan who see the Kimetsu no Yaiba: Mugen Ressha-Hen film will receive a “Rengoku Volume 0” manga volume, and the next issue of the Weekly Shonen Jump will also carry the 19-page one-shot manga by Gotouge.

Amazon previously previewed the cover of this year’s 42nd issue of Shueisha‘s Young Jump magazine last week, which revealed the 100-million-copy milestone, but later removed that part of the image. The issue also shipped on Thursday.

As of the manga’s 21st volume (which shipped on July 3), the entire franchise has sold 71.618 million copies in Japan, with 80 million copies in circulation. That includes digital copies and a 3-million-copy first printing for the 21st volume. The 21st volume ranked #1 and #2, respectively, on Oricon’s manga chart for the June 29-July 5 week. The regular edition sold 1,191,086 physical print copies, while the limited edition sold 850,091 physical print copies, for a total of 2,041,177 copies sold in three days.

Shueisha revealed last November that the Demon Slayer: Kimetsu no Yaiba manga was the company’s second highest-selling manga in 2019, second only to Eiichiro Oda‘s One Piece manga.

The manga ended on May 18. The book franchise also includes several novels.

Thu Sep 24 , 2020
Demizu Posuka, the illustrator of Yakusoku no Neverland manga, drew the cover illustration for the November issue of the women’s fashion magazine SPUR. The image, which depicts a woman wearing a colourful dress as she stands upon broken glass, represents the theme of “Reaching a new world after smashing the glass ceiling.” […] 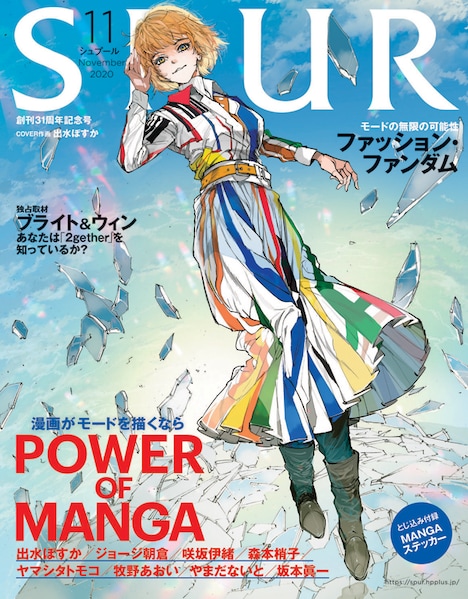