At Universal Studios Japan, Doraemon is currently appearing to commemorate the franchise’s 50th-anniversary by releasing “Doraemon: Nobita’s New Dinosaur” on Friday, August 7, 2020, in Toho. It was originally scheduled to release in Japan on 6 March 2020. However, due to the COVID-19 pandemic in Japan, the film was delayed to 7 August 2020. 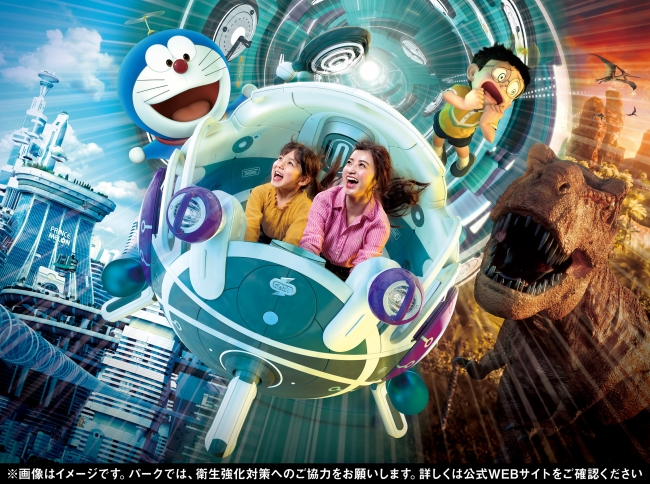 Completed under the supervision of the directors of the film, Ryuichi Yagi and Takashi Yamazaki, this virtual reality roller coaster has a completely original story that precedes the plot of the film. Riders will travel to the future to observe Nobita and Shizuka’s wedding, but when the adult Nobita steals Doraemon’s time machine and runs away from the wedding, you’ll have to chase him down through time and space in a Space Scooter in order to bring him back!

As you zoom through time, you’ll feel lots of different sensations, like wind and heat, as you see and hear the world around you. Since the ride will be located in the Jurassic Park zone, there will also be a visit to the Cretaceous period where you’ll dodge ferocious dinosaurs. It sounds like it will be a wild and exciting adventure as you travel throughout the world of Doraemon!

The “Stand By Me Doraemon 2” XR ride will be open on August 4 and will stay open until January 6. Universal Studios is currently only open for residents of the local area, but starting on July 20, anyone with a ticket can get in and enjoy this ride. Just make sure you wear a mask, observe social distancing, and try not to scream!

Trailer: “Stand By Me Doraemon 2”