On the night of July 11, the shinboku (sacred tree) of Gifu’s Shinmei Shrine, a towering cedar tree over 1,000 years old, has fallen due to a severe storm.

There are also legends surrounding the tree. According to the stories, long ago the community around the shrine was faced with a severe drought. Hoping for salvation, local villagers gathered and prayed at the shrine, and after seven days a white snake, a symbol of prosperity in Japanese folklore, briefly appeared, before slithering away into the earth at the base of the tree’s trunk. When the spot was examined, a spring of clean water was discovered. The tree later became a symbol of the community when the area around the shrine developed into Okute-juku, one of the rest stops along the Nakasendo, one of the great roads connecting Tokyo with Kyoto during Japan’s samurai era.

▼ Shinmei Shrine’s shinboku, prior to the storm 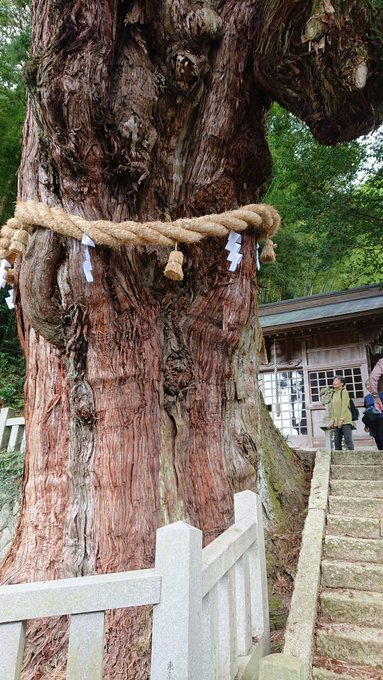 ▼ The shinboku stood atop the steps worshippers climb on their way to offer prayers.

But After the development of Okute-juku, once again the area faced a drought. Remembering the tale of the white snake, once again villagers gathered to pray at the tree, and this time it is said that a black snake appeared. Following this snake to a spot west of the tree, once again a spring was found, and this second source of clean water once again saved the community, allowing it to continue into the present day when it’s known as the town of Mizunami.

To this day, water could be drawn from the earth at the base of the tree. However, the water falling from the sky last Saturday proved to be too much for the shinboku. A nearby weather station recorded more than 1.3 meters (4.2 feet) of rainfall during the 24 hours between 8 a.m. on July 11 and July 12, and at around 10:40 p.m. on the 11th, a local resident reported that the tree had fallen, having overturned at the roots after the ground gave way.

As it fell, the trunk damaged a shrine warehouse and gate and crushed the roof of a neighboring residence. Its top branches lay across a stretch of the road that runs in front of the shrine, blocking traffic until work crews came to clear it away the next morning.

Thankfully, no injuries occurred, but the loss of the town’s symbol for the last millennium-plus still came as a shock to local residents. “It was the pride of our community, and we’re deeply saddened,” said a representative of the shrine, which has not yet said whether or not a replacement will be planted.