Muse SG announced on its Facebook page on Aug 5 that it will be streaming the television anime of Yoshiyuki Nishi‘s Muhyo & Roji’s Bureau of Supernatural Investigation manga. The first episode will stream on the Muse Asia YouTube channel on August 7 at 1:00 a.m. IST.

Muse Asia’s YouTube channel will stream the first five episodes of the second season of the anime daily. The channel will resume streaming from the sixth episode onward from August 11. Subscribers from India can stream the anime series for free. The anime series will also be available in Singapore, Malaysia, Thailand, the Philippines, Indonesia, Bangladesh, Laos, Myanmar, Nepal, Vietnam, Brunei, Cambodia, and Bhutan.

The second season of the Muhyo & Roji’s Bureau of Supernatural Investigation anime premiered in Japan on July 7.

Nishi’s original Muhyo to Roji no Mahōritsu Sōdan Jimusho (Muhyo & Roji’s Bureau of Supernatural Investigation) manga centers on Toru Muhyo, a prodigy and expert on magic law, and his assistant Jiro Kusano. The pair investigate supernatural incidents and dole out justice. The manga ran in Shueisha‘s Weekly Shonen Jump magazine from 2004 to 2008. Shueisha published 18 compiled book volumes and 10 trade paperback (bunko) volumes for the series. Viz Media released all 18 volumes of the manga physically and digitally in North America.

Nishi launched the Muhyo to Roji no Mahōritsu Sōdan Jimusho: Mazoku Magushi-hen (Muhyo & Roji’s Bureau of Supernatural Investigation: Magical Genus Magic Tool Master Chapter) sequel manga on the Shonen Jump+ website and app in March 2018, and ended the series in March 2019. The manga follows Muhyo and his friends after they have grown a little after the conclusion of the first series. The second and final volume shipped in April 2019.

Fri Aug 7 , 2020
The official website of Hanyou no Yashahime: Sengoku Otogizoushi (Yashahime: Princess Half-Demon), the anime sequel to Rumiko Takahashi‘s InuYasha franchise, revealed the main cast, additional staff, and the first promotional video on Aug 7. The television anime will air on Saturdays beginning on October 3 at 5:30 p.m. on Yomiuri TV and NTV. Trailer […] 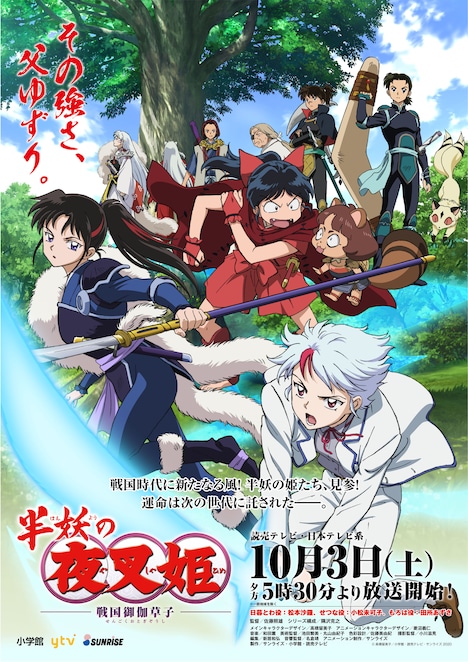