On August 15, 2020, the long-running anime and manga piracy websites KissAnime and KissManga started showing an error message to their visitors.

The message read,
“All files are taken down by Copyright owners. The site will be closed forever. Thank You for your support.”

Apparently, the authorities and copyright owners of various Anime, Manga titles took down KissAnime and KissManga‘s servers for illegally hosting and showing copyrighted material on their websites. This resulted in the permanent closure of said illegal websites.
Although some of its sub-domains still work like kissanime.site;, kissanime.tv but they will probably close down soon as well.

Not going into Legal Vs Illegal but it is a fact that it’s only thanks to KissAnime and Kissmanga that anime and manga are so popular worldwide. It has provided free access for over a decade to countless anime/manga all over the world. At its peak, it received over a million hits/day on their websites.

Even today, the majority of the world can’t afford to pay for legal alternatives like Crunchyroll, Funimation, Viz, etc. so for them, piracy sites like Kissanime/Kissmanga are the only options to enjoy what they like.

A lot of fans who depended on KissAnime and KissManga for watching/reading their favourite anime/manga grieved on Twitter amid the site’s closure. While some tweeted, ‘RIP KissAnime’, others shared memes about going to other pirated websites.

Anime Manga Industry gave a HUGE Blow to illegal piracy site Kissanime.
Both #Kissanime & #Kissmanga have been taken down permanently.
Although some of its sub-domains still work like https://t.co/7JTWAcHSEi, https://t.co/b536zrwdsI but they will probably close down soon as well. pic.twitter.com/amDT4VFig4

Me and my homies moving to Gogoanime after Kissanime got shut down pic.twitter.com/fmc1swRRgP

Heard KissAnime got taken down. R.I.P to a goated website, we lost a real one today. Rest Easy King 👑 pic.twitter.com/fwGUy5mOX8

*Kissanime gets taken down*

kissanime was there for me when no one else was pic.twitter.com/FzPyxvyfKf

hey kissanime and kissmanga thank you fro all those years, sadly I guess this goodbye. We will miss you pic.twitter.com/wRENmwNeZr

Well memes aside, we really hope that the Japanese Anime and Manga industry comes up with a new plan to woo the fans to adapt to their legal services.

Sun Aug 16 , 2020
The television ratings below are an estimate of the percentage of the population that watches a given program, based on data from a survey of households in Japan’s Kanto region. The ratings do not count recordings that viewers watch later. Program name Broadcaster On-air date Broadcast start-minutes Program average household […] 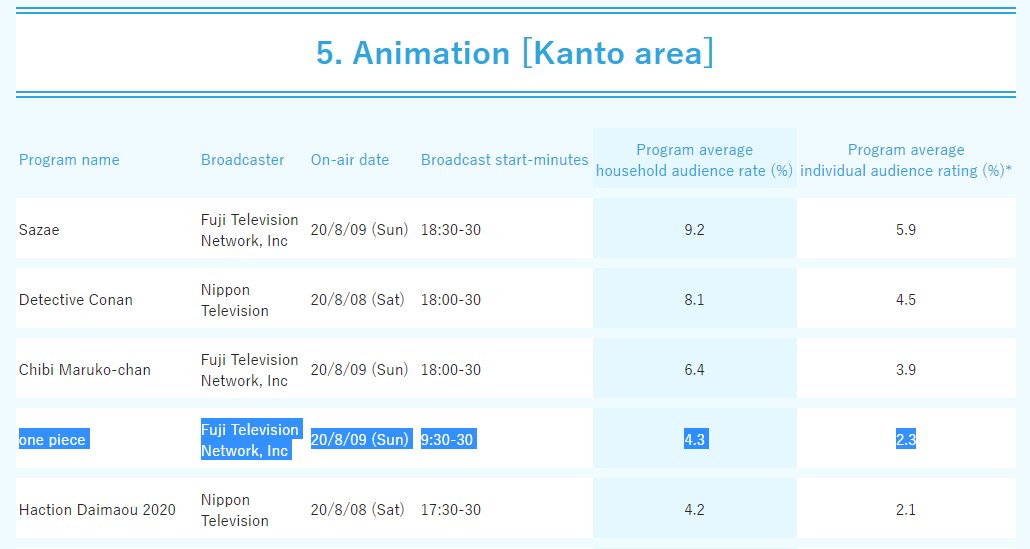