On June 5, 2020, Japan’s parliament enacted a revised anti-online piracy law to tighten copyright control, banning illicit downloading of manga, magazines, and academic texts, in addition to music and videos that were already covered by the existing legislation. 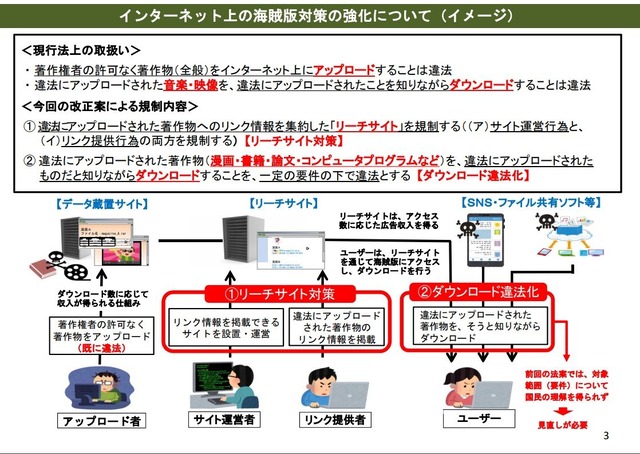 The law also regulates “leech websites” that provide users hyperlinks to download so-called torrent files of pirated materials. The ban on illegal downloading will take effect on January 1, 2021, while restrictions on leech sites will come into effect on October 1, 2021.

However, the amended legislation exempted “minor offenses” and “special instances” from being categorized as illicit amid concerns that excessive restrictions could hinder internet use and freedom of expression.

The revision will still allow for the downloading of a “few frames” (or a few pages) from a manga of several dozen pages or more, or posting photographs where the manga is not the focus of the photo. The revision will also not punish people who download derivative works (such as dōjin or fanfiction) or parodies.

Penalties for repeat offenders of illegal downloads will be up to two years in jail or a maximum fine of 2 million yen (about US$18,274), or both.

The new law also bans establishment and operation of leech sites, pasting hyperlinks of illegal websites on an anonymous message board, or providing “leech apps” for similar purposes.

Those found to be operating a leech website will face penalties of up to five years in jail or a maximum fine of ¥5 million, or both.

Last year, the government tried to submit a similar anti-online piracy bill to a parliamentary session but shelved it after receiving backlash from manga artists and experts who said the planned controls were too broad and could hinder legitimate activities such as research. The Agency of Cultural Affairs then revealed the draft of a plan, which contained exceptions for screenshots, to a panel of experts on November 27 to discuss the proposed changes.

An online poll by the agency also found around 90 percent of respondents said they will stop using, or use less frequently, piracy websites if downloading from those sites becomes illegal.

However, there are still loopholes, as videos showing copyrighted items in the form of a picture-story show or provision of such materials through streaming — as was the case with Mangamura — are not covered by the revised law as they do not involve downloading data to devices.

Also, many piracy site operators use servers overseas where rules are lax. So-called bulletproof hosting services that are lenient about what can be hosted on their servers and warrant high confidentiality hinder requests for information disclosure.

A site-blocking measure to forcibly deny access to certain websites is also difficult to implement in Japan, as it requires subscribers’ access data and could violate the privacy of communication.

“There’s a limit to what Japan can do on its own. International coordination and cooperation in investigations are indispensable,” a government source said.

The law revision came as the country saw a rising number of piracy and leech websites, notably the Mangamura site, which had over 100 million hits a month before being disabled in April 2018, causing an estimated loss of more than ¥300 billion ($2.75 billion) to publishers.

Mangamura hosted unauthorized copies of popular manga titles, including “Attack on Titan” and “One Piece.”

Mon Jun 8 , 2020
On June 2, 2020, Japan’s Ministry of Internal Affairs and Communications released its “Analysis of the State of the Expansion of Broadcast Content Overseas” report of 2018 which summarizes the outline of broadcasting contents export in Japan. The survey is compiled annually by the Ministry of Internal Affairs and Communications and […]