The October issue of Shinchosha‘s Monthly Comic @Bunch magazine revealed on Friday, Aug 21 that Sakuma Chikara will launch a new manga in the magazine’s November issue on September 19. The soccer manga’s title is LINKMAN, and the first chapter will have 63 pages including an opening color page. Sakuma launched a manga adaptation of […]

The ComicFesta Anime website announced on Thursday, Aug 20 that Tamami Katsura‘s Otona nya Koi no Shikata ga Wakaranee! (Adults Are Clueless About Falling in Love!) manga is confirmed to inspire a television anime. The anime will premiere on the Tokyo MX channel this October. < div align=”center”><img class=”aligncenter” src=”https://ogre.natalie.mu/media/news/comic/2020/0820/otokoi_KV.jpg?imwidth=468″ alt=””Adults don’t […]

The winners were announced for the sixth “Tsugi ni Kuru Manga Taishō” (up-and-coming manga awards) with the top prize going to Yoshifumi Tozuka‘s Undead Unluck manga which is being serialized in the Weekly Shonen Jump. The story follows Fūko Izumo, otherwise known as a woman cursed with “Unluck”. Fūko brings misfortune to […]

On Wednesday, Aug 19, Indonesian publisher M&C! announced that it has cancelled its publication and release of Tatsuya Matsuki and Shiro Usazaki‘s act-age manga, adding that the cancellation was the best step it could take as its moral responsibility, given the sensitivity of the issue. The editors of Shueisha‘s Weekly Shonen Jump magazine had announced last Monday that […] 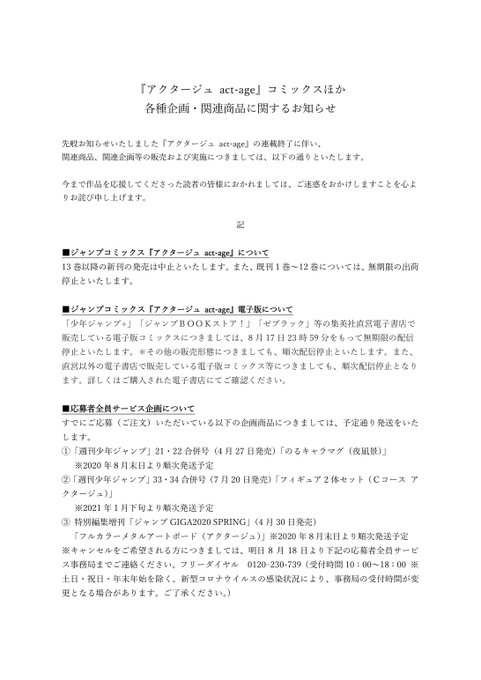 On Monday, Aug 17 the official website for Shueisha‘s Shonen Jump brand announced that sales and distribution of Tatsuya Matsuki and Shiro Usazaki‘s act-age manga volumes have been indefinitely suspended. That includes the print edition of the 12 existing volumes, as well as the digital edition via B‘s services (as of 11:59 p.m. on Monday evening) […]

Coolkyoushinja confirmed on Twitter on Aug 11 that Amahara and his ‘Heion Sedai no Idaten-tachi’ (Idaten Deities in the Peaceful Generation) manga is getting a television anime project. Coulkyoushinja posted a picture commemorating three of his series that are getting new television anime: The image shows characters from (from left to right): Heion Sedai […] 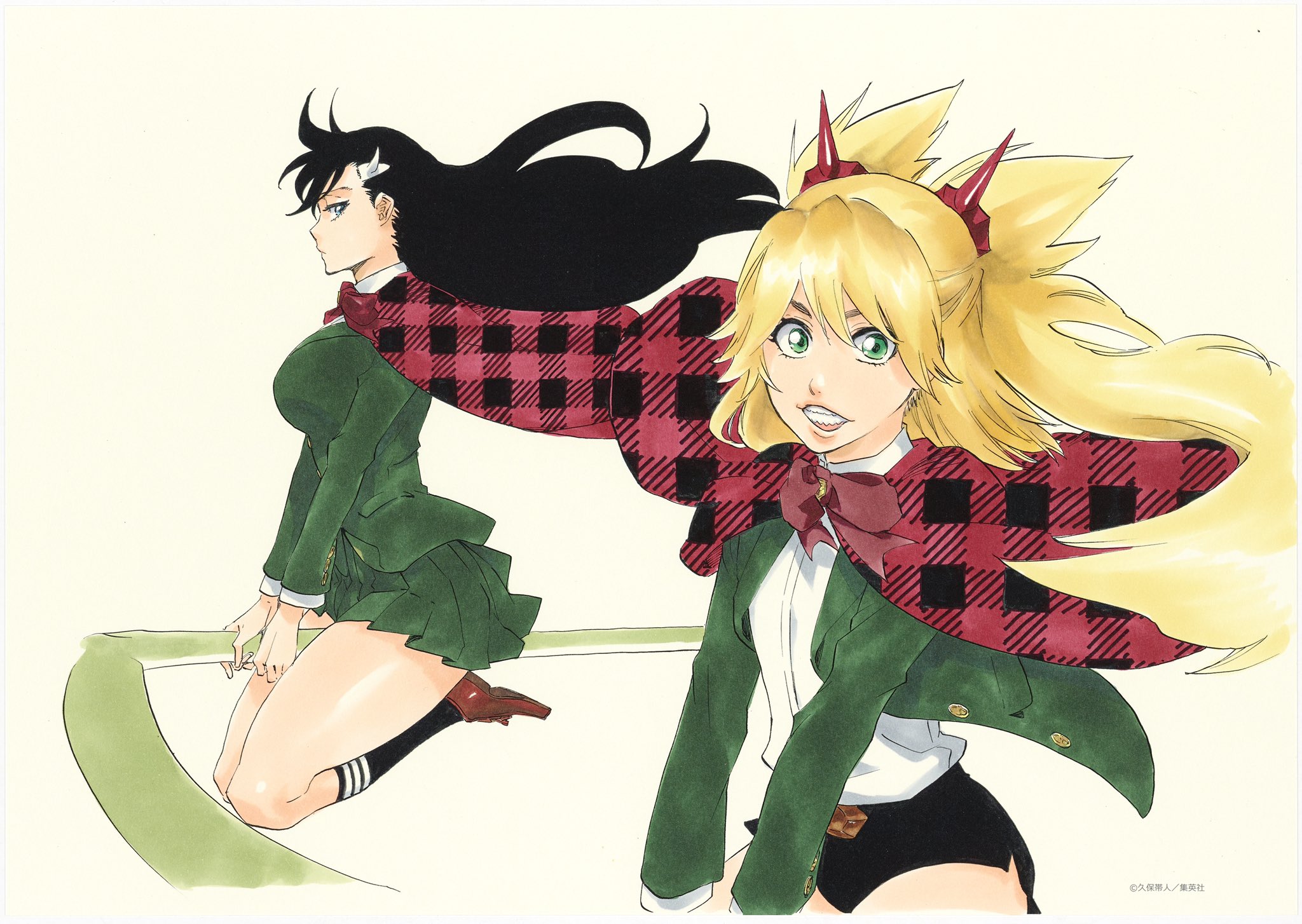 This year’s combined 36th and 37th issue of Shueisha‘s Weekly Shonen Jump magazine revealed that Tite Kubo‘s new ‘Burn the Witch’ manga will have four chapters in total, and will debut in the magazine in its 38th issue on August 24. The manga will feature on the cover of the 38th issue, […]

Shueisha‘s magazine Weekly Shonen Jump combined 36th and 37th issue revealed that Kaiu Shirai and Posuka Demizu will publish a new 19-page chapter of their Yakusoku no Neverland manga at the “The Promised Neverland Special Exhibition” event in Roppongi Hills in Tokyo from December 11 through January 11. The duo published a new one-shot manga […] 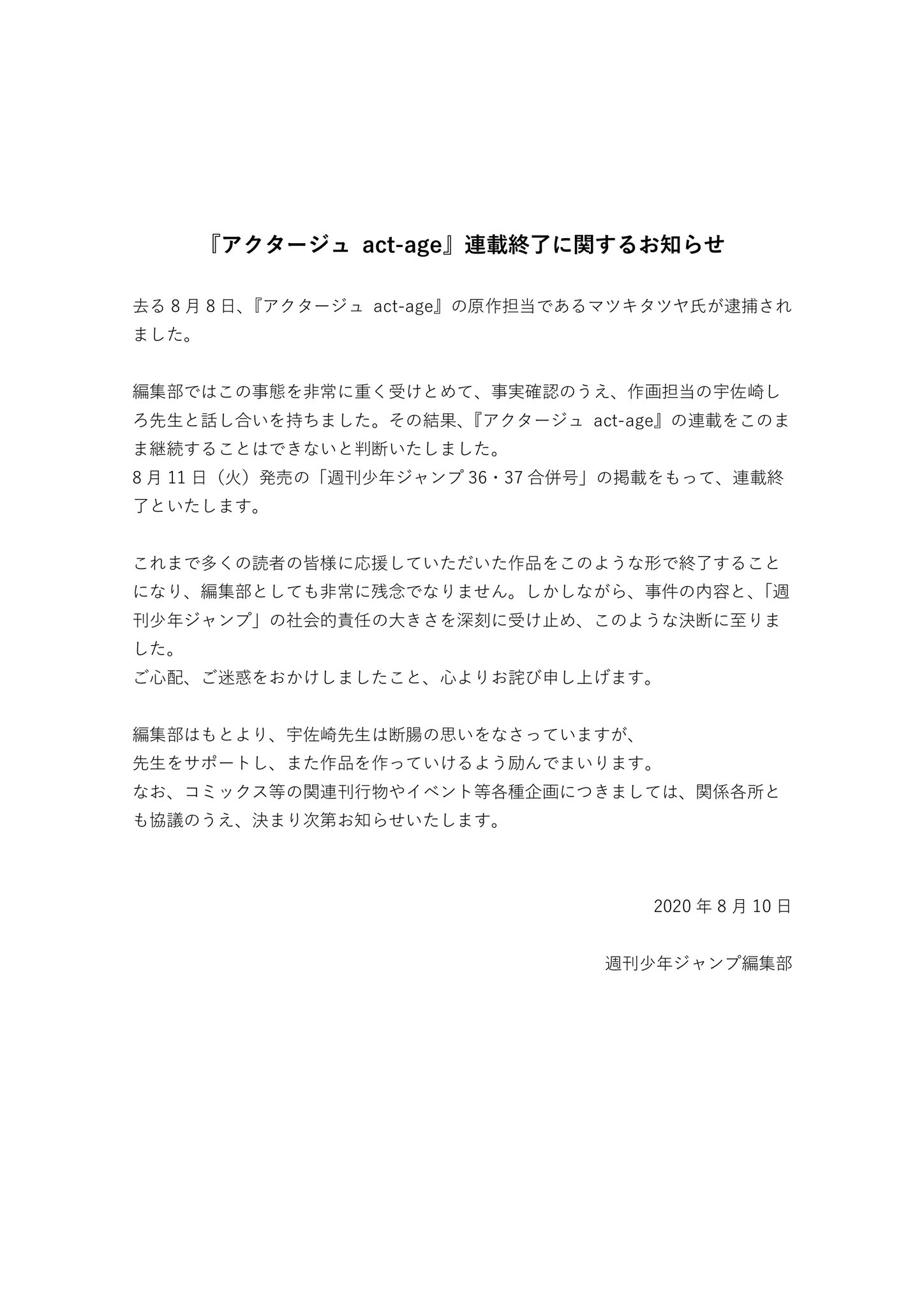 On Aug 10, the official Twitter account for Shueisha‘s Weekly Shonen Jump magazine announced on Twitter that it will the serialization of story writer Tatsuya Matsuki and artist Shiro Usazaki‘s ‘act-age’ manga with immediate effect. The chapter that will appear in the magazine’s combined 36th and 37th issue, which will ship on Aug […]

Based on the famous Japanese folklore Momotarō, Coolkyoushinja (クール教信者) and Johanne’s (ヨハネ) “Peach Boy Riverside” (ピーチボーイリバーサイド) manga is confirmed to inspire a TV anime series that is set to premiere in July 2021. A teaser visual and video showcasing the eerie smile of the series protagonists, Sally and Makoto, are […]