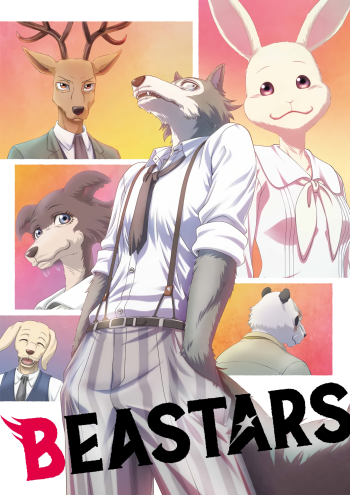 This year’s combined 36th and 37th issue of Akita Shoten‘s Weekly Shōnen Champion magazine revealed on Thursday that Paru Itagaki‘s BEASTARS manga was “right before its climax.” Itagaki launched the manga in Weekly Shōnen Champion magazine in September 2016. Akita Shoten published the manga’s 20th volume on Aug 6. Itagaki had teased in January that the “end was in sight” for […]

Mangaka Nyoijizai launched a new manga titled Silver Pole Flowers in Kodansha‘s Comic Days app on August 1. The manga centers on two women as they travel their own individual paths in pole dancing: Hana, a college student who also pole dances in night clubs despite her family’s disapproval; and Karin, a practitioner of pole sports […]

This year’s 35th issue of Shueisha‘s Weekly Shonen Jump magazine revealed that Kaiu Shirai and Posuka Demizu will publish a new one-shot manga titled “Shinrei Shashinshi Kōno Saburō” (Supernatural Photographer Saburō Kōno) in the magazine’s next issue on August 11. The one-shot will be 45 pages long and will focus on a photographer documenting […]

The official website for Kodansha‘s Weekly Shōnen Magazine announced that Nakaba Suzuki will publish a one-shot manga for his Nanatsu no Taizai manga in the magazine’s combined 36th and 37th issue on August 5. The manga will follow Ban’s son Ban Jr. Lancelot. Suzuki launched Nanatsu no Taizai manga in Weekly Shōnen Magazine in 2012 and ended it on March […]

Retailer HMV is listing the September issue of Gakken Plus‘ Megami Magazine with a cover image that states Kazuki Funatsu‘s Dogeza de Tanondemita (I Tried Asking While Kowtowing) adult manga is inspiring an anime adaptation. A website and Twitter account opened for the anime on July 30. The website reports that the anime will be composed of shorts, […]

Yasuhito Nogi‘s A Certain Scientific Railgun: Astral Buddy manga ended in this year’s September issue of Kadokawa‘s Monthly Comic Dengeki Daioh magazine on July 27. The manga’s fourth volume will ship in Japan in late October. The magazine teased in June that the manga would reach its climax on Monday. Nogi launched the manga spinoff of Motoi Fuyukawa‘s A […]

Planet’s (プラネット) pottery manga “Yakunara Mug Cup Mo” (Let’s Make a Mug Too / やくならマグカップも) is confirmed to inspire a TV anime series. A key visual, main cast, and staff has been revealed. The series centers on four high-school girls who are attracted to Mino Ware, traditional Japanese pottery that […]

The August issue of Kodansha‘s Afternoon magazine revealed on Wednesday that Wataru Kubota‘s manga adaptation of Makoto Shinkai‘s anime film “Tenki no Ko” (Weathering With You) will end in the magazine’s next issue in August. The manga’s third and final volume will ship this October. Vertical licensed the manga, and it will ship the first volume on September 1. The company describes the […]

This year’s 15th issue of Hakusensha‘s Young Animal magazine published a new-one shot manga “Seimitsu Saiten” (Checking Carnal Secrets) by Ryuta Amazume. The story centers on an adulterous relationship that begins when a workaholic married woman named Aoi has a chance encounter with someone while resting in a room. Amazume ended his Nana to Kaoru manga in Hakusensha‘s Young Animal magazine […]