The official website for the anime of Fuse and Mitz Vah‘s That Time I Got Reincarnated as a Slime novel series announced on Thursday that the upcoming second season of the anime has been delayed. The production committee explained that the production had alloted enough time, but the state of emergency in Japan due to the ongoing new coronavirus greatly affected their production schedules.

The anime is based on a comicalized version of the light novel series by the same name popular on the novel posting site “Become a Novelist". It depicts a salaried worker in modern society reincarnating in a different world as a slime and playing an important role.

The first season of TV anime was broadcast from October 2018 to March 2019.

The first cours (quarter of a year) of the second season has been delayed from October 2020 to January 2021, while the second cours is delayed from April 2021 to July 2021.

In addition, the TV anime of Shiba‘s spinoff manga The Slime Diaries: That Time I Got Reincarnated as a Slime (Tensura Nikki Tensei Shitara Slime Datta Ken) has been delayed from January 2021 to April 2021.

♦ Staff for The Slime Diaries: That Time I Got Reincarnated as a Slime

♦ Cast for The Slime Diaries: That Time I Got Reincarnated as a Slime

Source: That Time I Got Reincarnated as a Slime anime franchise‘s website, Mantan-Web, ANN

Kimetsu no Yaiba will feature on the "Animedia" magazine's cover in it's July Issue.

Thu May 28 , 2020
TV anime “Kimetsu no Yaiba” which is based on the manga of the same name by Koyoharu Gotōge will feature on the cover of the anime magazine “Animedia” in it’s July issue. On the cover, the main character, Kamado Tanjiro is with a smiling face while his sister Nezuko is carrying […] 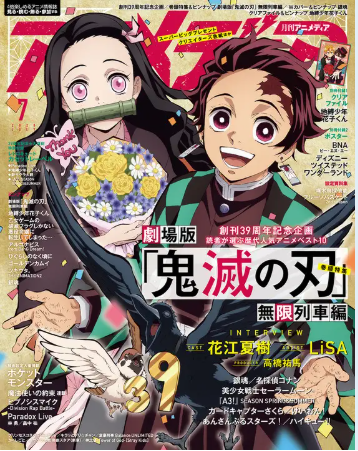